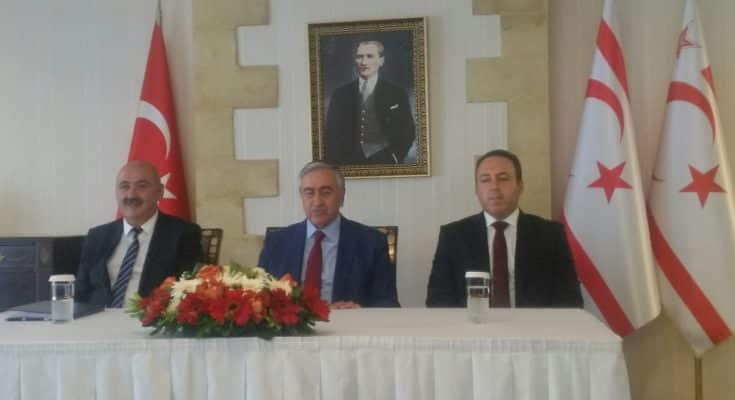 TRNC appeals to international support in solving the Cyprus question

The Turkish Republic of Northern Cyprus (TRNC) is appealing for support from the international community so as to come up with a lasting solution to the Cyprus question.

Briefing journalists ahead of the 20th July celebrations at his residence in Lefkosa yesterday, the TRNC President Mr Mustafa Akinci said he expected a conclusive deal to the Cyprus issue that has for nearly five decades been on the agenda of the United Nations Security Council.

“The Greek and Turkish Cypriots have been holding continuous negotiations since 1968 but over the years we have not agreed on a peaceful solution to the Cyprus question. In 1960 we had a united Cyprus with a Greek Cypriot President and a Turkish Cypriot as Vice president but in 1963 that joint republic was destroyed with the aim of making Cyprus a part of Greece. It is sad to note that the Greek Cypriots are struggling to become the only masters of this island,” President Akinci said.

Available literature notes that since1968, the two sides have been negotiating, on and off, in order to reach an agreed settlement but no settlement has been achieved to date.

In that regard, the Turkish Cypriots’ calls for the diagnosis of the problem “have fallen on deaf ears and the Greek Cypriot side has been allowed to get away with all that it has done in Cyprus under the hijacked title of “the Government of Cyprus”.

Gulfem Sevgili, the Director of Relations in the office of the Deputy Prime minister and Ministry of Foreign Affairs bemoaned the fact that there was no viable solution to the Turkish Cypriots who are enduring “unjust isolation and inhumane embargoes on their economic, social, cultural and political life.”

“As journalists, we appeal to you to make the international community realise the fact that the island of Cyprus is the common home of the Turkish and Greek Cypriots alike who should share and have an equal say in its destiny. Thus a peaceful future for the younger generations should not be held prisoner to the tragic experiences of the past. As the Turkish Cypriots we have never lost the will or determination for a sound solution which would ensure that history would not repeat itself. It was in this spirit that the Turkish Cypriot side always participated in UN sponsored negotiations aimed at the establishment of a new partnership based on the sovereign equality of the two ex-partners,” Sevgili said.

President Akinci will be hoping for a lasting solution to the Cyprus problem at the UN General Assembly in September 2018 since a UN envoy is expected in Cyprus soon to map the way forward ahead of the meeting.

He urged interested parties to come up with an arrangement that does not encroach upon the powers of the two sides of Cyprus.

“What is lacking from the Greek Cypriots is the will to share power and wealth with the Turkish Cypriots. We are proposing to form a joint committee to extract natural gas in the Mediterranean but the Greek Cypriots are reluctant to come to the negotiating table because they feel they have an exclusive right to the resources. We showed our readiness for mutual cooperation in the 2004 referendum,” President Akinci added.

TRNC is making efforts to improve the lives of its people and promote democracy and economic development. More than 120 countries in the world are sending students to the country’s 16 universities. However, there are no direct flights to the country because at the moment it is not internationally recognised.

The republic gets support from members of the Organisation of Islamic Countries, which are yet to officially recognise it. It has offices in more than 30 countries and has trade and cultural relations with a number of Western countries. Apart from a vibrant education system, there are opportunities in the tourism sector in TRNC.