In 2004, when the South Cyprus joined the European Union (EU), many things changed. Now EU citizens, who want to visit the North, only need to have a passport and fill in a form at control post. The easiest place to do this is Nicosia, then you won’t even need to rent a car. The island has a perfect climate where average temperature even in January reaches 10 degrees.

Nicosia of our days is the only remaining capital in the world which is divided by a wall: a part in Venetian stronghold with eleven towers belongs to the Northern, the other part belongs to the Southern Cyprus.

The Green Line in Nicosia was firstly drawn in 1964 with a pen on a map by General Peter Young, and it is still marked by a wall of concrete blocks and barricades. Cafes are situated only a few meters from military guard tower in the main old town Street called Ledra. About a third of million residents of Cyprus live in Nicosia. Both sides of the capital can be seen from the top of Shakolas tower in the Greek part of Ledra street -there is a hall on the 11th floor of the tower specially for panoramic views. From there you can see a huge Turkish flag drawn on the mountain slope on the Northern side.

The most famous and probably the most beautiful building here is St. Sophia Cathedral, which has been turned into Selimiye Mosque during the Ottoman period. Thick gothic walls silence all the noise from the street as you enter this church. There are no paintings inside, only bright grey arches. There are carpets on the floor and you can always see men and women, turned to the right wall, praying. Mecca is on that side. Many old Orthodox churches in the Northern part of Cyprus have been turned into mosques, and although Islam is quite weak here, since 1974 many new ones have been built. The more colorful, brighter and more alive corner of Northern Nicosia is the 16th century Ottoman Great Inn -Buyuk Han. There is a small mosque inside its yard, it is surrounded by two-storey building with high arched gallery. In the Ottoman period there used to be a market on the first floor and 68 rooms to rent on the second. Traders used to go to that mosques five times a day to pray. Now Turkish Cyprus souvenirs are sold in both floors of the Great Inn. It is a center of Northern Cyprus culture and art. You can buy embroidery and needlework, bags, whicker chairs, soaps, beauty products, ceramic and other handmade goods. You can also shop at nearby indoor bazaar.

4,5 km long wall, which surrounds the old town of Nicosia, was built in 16th century by rulers of Venetian republic which ruled Cyprus. Silhouette of it became the official coat of arms of the capital. The whole old town fits inside a round stronghold with towers, so ifyou’d like to take a walk there, having a map would be useful. The most important objects in Northern Nicosia are connected by a blue line painted on the pavement in the streets.

It is worth to take a look at court palace from British colonial times and a quarter of houses from the beginning of 20th century. Kyrenian gates – one of three gates in the defensive wall, built in the Northern part of the wall to protect Nicosia in the Venetian period. Now tourism information center is situated there.

As the weather gets darker, the old-town ofNorthern Nicosia empties and becomes silent. The actions moves to the new part of the city, behind the walls. In the Mehmet Akif Caddesi casinos are opened until the morning, bars and restaurants offer alcohol.

Between castles and revived resorts

Phoenicians, Assyrians, Egyptians, Persians, Helenians, Romans, Byzantines, Venetians and Ottomans left their marks in the North Cyprus. Nature and mountains are the most beautiful parts of this place, you can find many interesting things there. Because of low prices foreigners are hurrying to buy real estate here.

We are traveling around here with Aydin Karacay, director of the first travel agency ‘True Travel’, which opened doors of Northern Cyprus to Lithuanians.

We take a small bus and travel to Girne resort on the Western coast of the island. After a while we are taking a walk on a crescent shape Girne bay. You can see Turkish and Northern Cypriot flags flying in the sky, yachts and small ships swinging in the sea, restaurants on the sea bank are full of people, huge 16th century Venetian fort stands near the port. St. George Church, surrounded by thick walls, looks like it is inside a pit. You can see noisy port from the walls of stronghold. 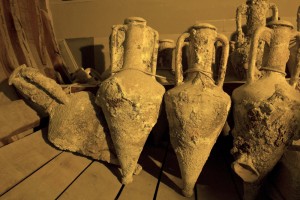 Remains of a trade ship, dated 3rd century B.C., is exhibited at sunken ships museum inside the fort. It is the oldest trade ship taken out of sea depths in the world. Not only clay jugs of oil, wood and iron tools survived inside of it, but also a huge pot full of almonds, which by now look like stone. The oldest findings exhibited here are dated 7th century B. C.

Soon we are on the top of a mountain at the gothic Bellapais Monastery, the name of which means “Abbey of Peace”. This monastery, built in 1198-1205 by Augustinians, just like majority of other Christian buildings in the Northern Cyprus, became a museum. There is also a restaurant with fantastic panoramas nearby: sitting there you can see historical ruins, Girne and the sea.

From Bellapais we travel to St. Hilarion Fort, 732 meters over the sea level, it is one of three remaining fortresses standing on the mountains in Northern Cyprus. Byzantians built it from former monastery and church. The fortress was named after St. Hilarion, because in the Medieval period he came here from Jerusalem to spend his last years. Aydin does not miss a chance to say that Walt Disney used the image of the fortress to create the castle in animated movie ‘Snow white and seven dwarves’.

The next day Aydin urges us to travel to the Eastern part of the island. Famagusta, which was considered the most beautiful resort in Cyprus before partition, is situated there. Four decades ago more than half of all hotels of Cyprus were situated here. In the Venetian period, Cypriot goods used to be transported from Famagusta port to ports of Eastern Mediterranean countries, and then, via Silk Road they would reach the Far East and the West.

Even today Famagusta old town is surrounded by Venetian wall, standing on which Aydin tells a story. He says that William Shakespeare’s Othello drama took place on this wall. The Fort, also called as “Othello fortress”, was build in 14th century, but a century later Venetians rebuilt it.

You can see a church tower rising from Famagusta old-town if you look from this high wall. When you come closer, it turns out to be St. Nicholas Cathedral, damaged by war, which was turned into Lala Mustafa Pasa Mosque with a minaret. There French Lusignan dynasty’s rules used to be crowned as kings of Jerusalem.

Famagusta’s suburb Varosha stands on the border of two countries. It became a ghost town and is still abandoned, protected by barricades with barbed fences. 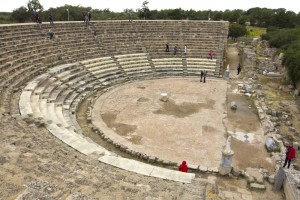 To the North of Famagusta we come to ruins of ancient city of Salamis, the oldest remains of it reach 6th century B. C. Forum, thermal baths, stadium, amphitheater remain from the Roman period. 15 thousand people could watch plays at this huge theater, now only several tourists are sightseeing here. One stands in the middle of the theater and sings, later another one reads poetry in the same spot. Acoustic here is perfect, you can hear everything very well even sitting at the highest place.

Near Salamis we visit St. Barnabas Monastery, built in honor of St. Barnabas from a Jewish family which lived in Salamis. When he visited Jerusalem he became Christian and returned to Cyprus with St. Paul to spread the new faith. Aydin tells this story walking around the monastery’s church, which is now icon museum.

Long cape of Cyprus, lying from North East, interests a lot of people when they look at a map. Only one small road leads to the very peak of the Karpaz peninsula, and on both sides of it only meadows and olive tree gardens can be seen for hours, no people or cars. Aydin’s answer to the question who lives here is surprising: donkeys. Joke is a joke, but soon a wild donkey stands in our way. It is big, brown and tries to put his head inside the car through the window. A hundred meters further and a whole donkey family enters the road.

Unattended donkeys are in the most silent and calm corner of Cyprus. This peninsula is the Karpaz National Park and human activities are strictly restricted here. According to Aydin, wild donkeys, protected by state in Karpaz peninsula, became a horror to local farmers: they eat olive trees, vegetables, damage to farm yards. It is forbidden to harm or shoot donkeys, they have rights here which they very well use. Crops and forests are fenced, trees in gardens are covered.

In the past Cyprus used to provide olives to the whole Mediterranean region. Even today about 2 thousand protected old, over a thousand years old olive trees still grow in Cyprus.

The Karpaz peninsula has 2 km beaches of yellow sand, where every year the great sea turtles caretta caretta and green turtles chelonian mydas come to lay eggs. Tourists come to Karpaz for hiking, there are at least 60 hiking tracks in Cyprus mountains.

‘Stolen steak’ and other treats

If you did not know, you would never suspect the name of island’s traditional meal -lamb steak kleftik – comes from a word kleft, which means ‘steal’. Stolen meat in the poor times was not a prank, but necessity. Kleftik cookers used to go to steal the sheep at night and stole it nor from the nearest, but the farthest one, so the neighbors would not suspect. After stealing the sheep they would cook it on a fire in a pit. Thieves used to steal only one sheep, no more, that was the rule of kleftik.

Now kleftik can be tasted at restaurants. No one steals the sheep anymore, but the old name survives. It takes several hours to prepare this meal, so it must be ordered in advance. Also, at restaurants and markets you can taste traditional Cypriot cheese hellim from goat or sheep milk with mint.

If not for kleftik, then for meze – cold and hot snacks – you should go to a restaurant. Sometimes you would not even need the main course after meze – chickpea hummus, cacik with cucumber and yoghurt, tahini, pickled vegetables, halumi cheese, olives and dried beef.

Cypriots eat a lot of potatoes, produced locally, mostly in Karpaz, British also like them very much.