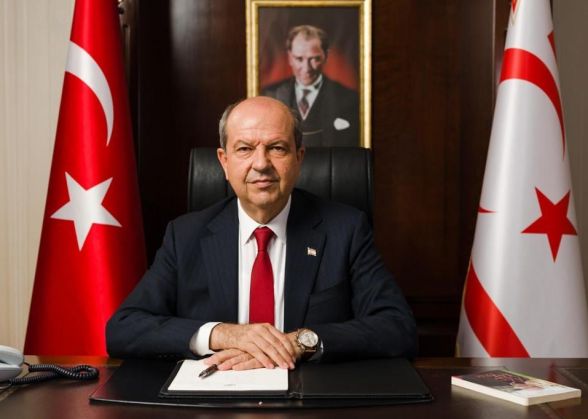 Most recently, Turkish Republic of Northern Cyprus (TRNC) has celebrated its “National Day”. Despite, “sincere efforts” of successive leadership of the TRNC the resolution of it remained “frozen” and “fatal” for achieving the end goals of the greater recognition, connectivity and development.

The constant “rigidity” of the South Cypriot leadership has been remained the main “stumbling block” in its peaceful political & constitutional settlement. Unfortunately, it has now been “dubbed” as grave yard of international diplomacy due to many complicated socio-economic, geo-political and geo-strategic reasons.

TRNC has also been remained unfinished agenda of European Union (EU) & UN alike. Its solution is still a far cry. But hopes have been again recharged after recently announced paradigm shift in the political discourse of the TRNC. In the near past, during Jenča’s meeting with Tatar, the Turkish Cypriot leader presented his new proposals for “the future cooperation of two states” under four pillars, and would submit two more, one on demining and one on immigration. Tatar noted that the first of the issues concerned shared hydrocarbons exploration, second an electricity interconnecter with the EU through Turkey, thirdly joint solar energy projects and fourth, shared use of the island’s water resources.

He expressed his “readiness” to advance this “determination” while maintaining his “sovereign rights”, “equality” and “equal international status”. He also asked the UN Secretary General to encourage Mr Anastasiades to consider our proposals in good faith. It would create win-win propositions, mutual protection of vested rights and needs of both the parties.

The president of TRNC Tatar reiterated the need for cooperation between the two sides on the island, termed mutual cooperation as a necessary environment of reconciliation, and to the peace and stability in the region.

He expected a positive attitude from all relevant parties, especially from the Greek Cypriot side, on the implementation of these proposals to contribute to the peace, stability and prosperity of both islands and region. Meanwhile, Turkey’s Foreign Ministry welcomed Tatar’s new cooperation proposals and subsequently, strongly supported the proposals that envisage cooperation with the Greek Cypriot side on the basis of “Sovereign Equality” and “Equal International Status”.

He hopes that the implementation of these workable proposals will not only contribute to peace and stability in the Eastern Mediterranean but also help the establishment of the common ground for the settlement of the Cyprus issue, through cooperation between the two existing States on the Island.

Cyprus has been mired in a decade’s long dispute between the Turkish and Greek Cypriots, despite a series of diplomatic efforts by the U.N. to achieve a comprehensive settlement. Frequent ethnic attacks starting in the early 1960s forced Turkish Cypriots to withdraw into enclaves for their safety.

Unfortunately, once again, the leader of Greek Cypriot Administration Anastasiades rejected the new proposals constitute so-called another attempt to establish the “unacceptable narrative” of a two-state solution. Nevertheless, he added that he would be ready to discuss all the proposals, both those put forward by himself and those put forward by the Turkish Cypriot leader, provided that the dialogue takes place on the basis of the agreed framework for a solution, as set out in UN resolutions and Security Council resolutions. Greece has been engaging in demagoguery and indulged in dishonest rhetoric which had proven unable to provide a legal response. President Tatar condemned recent attempts by Greece to militarize islands in the Aegean Sea, just west of Türkiye, which have non-military status under international treaties, saying that he was following recent developments on the matter with “concern.”

“Cooperation between the TRNC and Türkiye is of the utmost importance in maintaining the balances in the Eastern Mediterranean,” Tatar said.

Speaking on ongoing efforts to solve the Cyprus issue, Tatar added that proposals by the Greek Cypriot side that would “degrade the sovereignty of the TRNC and limit its authority are null and void.”

To resolve the frozen issue of Cyprus the UN sponsored peace talks have initiated for many years. In 2004, a peace plan was presented to the Turkish and Greek Cypriot communities in separate referendums. The plan would have reunified Cyprus as a federation of two politically equal states, prior to the island joining the EU. Turkish Cypriots voted in favour, but the Greek Cypriots rejected the plan. Cyprus subsequently joined the EU. While the whole island is technically part of the EU, EU law does not apply in the north which has created spillover socio-economic, geopolitical and geostrategic repercussions.

Moreover, there have been attempts to revive peace talks since 2004. These included UN-sponsored talks launched in 2017. These talks collapsed after the Greek foreign ministry rejected it.

On his part, TRNC president Tatar rejected the UN model of a federal Cyprus and supports a “two-state solution” formalising the current division of the island. President Erdoğan also backs Tatar’s plans to open up the resort of Varosha which has been condemned by the UK and EU as a provocative step in so-called breach of a UN resolution. An informal five-party summit i.e. Turkey, Greece, the UK, and the Greek and Turkish Cypriots was held in April 2021.

According this, Tatar said there was no point in holding formal talks without recognition of the Turkish Republic of Northern Cyprus as a state and that he would not drop the two state proposal. The leader of Greek Cypriot Administration Anastasiades said that this proposal would never be accepted. In January 2022, Tatar said that he asked the UK to host fresh talks between himself and Greek Cypriot leader Anastasiades.

Emerging geo-economic necessities and rapidly changing geo-energy scenarios have flared up tensions in the Eastern Mediterranean since 2018. All stakeholders claim to exclusive exploration rights in these waters. Greece and Turkey have held talks to defuse the tensions which are still active to resolve the issue. Afterwards, Greece breached “aerial sovereignty” of Turkey and worsened diplomatic ties.

On 15 November 1983 the ‘Turkish Republic of Northern Cyprus’ (TRNC) was established. The Cyprus dispute is still an ongoing conflict between the Greek Cypriots and the Turkish Cypriots. Since 1963, when the violence started, the green line separated the two areas on the island. Till today, over 100 negotiations have been presented to Greek and Turkish Cypriots in hopes of coming to an agreement, but every time one is proposed, one of the sides refuses the deal. The Cyprus dispute is still, to this day, unresolved.

TRNC leadership and its people have been struggling against communal domination since 1950. They have been confronting against political domination and cultural & ethnic discrimination of the Greek and Greek Cypriot since 1964.

Unfortunately, they have been witnessing denial of equal rights and just sharing in the system and governance. Ultimately, it has been firm resolve of Turkish Cypriot’s people, societies/communities to stand against all Greek state meekness. Siege and sanctions could not produce any dint in the inspirations of the people of TRNC. Now they are more focused and resolved.

Conflict of Cyprus has many dimensions. During 1950’s in the Cyprus, Turkish and Greek bilateral relations remained on the high tensions. Subsequently, two sides and their respective societies/communities took different positions in the Law of UN. First of all, two sides acquired the equivalent status on the UN, and later the Greek society obtained more advantage against the Turkish society, through political manipulations, Turkish society status was shifted as secondary.

Turkish Cypriot’s status took its last shape in the UN frame by the wrong written declaration of freedom of the NCRT and this phase still maintained the status of the TRNC in the UN’s Law. It was against all practices of international law and established techniques and strategies of modern “conflict resolution” discipline. Moreover, UNSC’s recommendations (541 & 550) were also not welcomed due to its basic flaws and functionalities.

The government of Pakistan has been true supporter and friend of TRNC. Pakistan was among the first countries that showed willingness to recognize the Turkish Republic of Northern Cyprus. Turkish Cypriot people have great love and affection for Pakistani people, which is growing with the each passing day.

TRNC and Pakistan enjoy deep rooted brotherly bilateral relations since the commencement of the relations. Pakistan shares many historical and religious commonalities with TRNC. TRNC is a historical and enriched in cultural connections and resource rich country located with a significant potential in the field of economy and human resource. Pakistan has always stood with TRNC government and its people in every international forum. Pakistan wants a quick and just solution of TRNC.

TRNC wants a settlement that respects democratic principles, human rights, fundamental freedoms, respecting different cultures and ethnicities, respecting both sides and that Cyprus is aligned with the European Union in the future. In the past, the TRNC presented solutions based on a bi-communal, bi-zonal federation with political equality which has now been further elaborated, updated and shared with UN and the South Cyprus leadership. The TRNC is now doing whatever necessary to work on a new partnership based on a two-state solution and political equality.

The Mediterranean Island of Cyprus has suffered a long history of foreign domination, violence and civil strife. Now it is the high time to resolve this issue according to the ground realities beyond the realms of power-politics and wishes of imperialistic forces. The will of people of TRNC must be supreme.

Unfortunately, Greek Cypriots “hang-over” of “power hunger” want to keep as much power as possible at the federal government level and ensure that the new state is a continuation of the Republic of Cyprus. The Turkish Cypriots previously sought to keep as much power as possible within the two constituent entities and ensure that their own entity was full protected but most recently has presented the new proposals based on two-states solution.

The residual resolution of others issues pertaining to security, residence and citizenship rights, the rights of settlement and property issues should be gradually settled providing both Cypriots a “strategic cushion” to some kind of political accommodation in the days to come.

Ultimately, the ‘two-state solution’ would formalise the de facto reality of two divided territories. TRNC president Tatar and other politicians on the right of the political spectrum in Northern Cyprus now reject a federal solution.

TRNC has been tangled between the hope of settlement and disarray of stalemate for so many years. It has been swinging between the notions of trust and distrust, confidence and conflict, cooperation and conspiracy and the last but not the least coordination and confrontation for more than 54 years.

In broad terms the conflict in Cyprus can be resolved in one of two ways i.e. recognition of the two parties as two separate states or guaranteeing the integrity and sovereignty of each party while providing for a mechanism that links them but new conflict resolution proposal of the TRNC based on two-state solution has changed the landscape.

There is need to build institutions, which would facilitate the two peoples and two states of the Island, to work together. Cyprus has common environmental, water and health problems on the Island. It is essential that the two states of the Island through their departments come together and discuss these issues. They can initially use the facilitation of a third party to start the process.

Both parties in Cyprus attach primary importance to their separate national identities, existence and respective democratic states which must be respected. Structural equality and symmetry are the essential ingredients in translating political equality into practical provisions for both the parties.

Educational, commercial, cultural, sports and tourism diplomacy of the TRNC may be good options to win hearts and souls of the people and policy makers alike to gain more and more international recognition beyond the playground of power politics. Bilateral cooperation in diverse sectors of economy, investments, joint ventures, real property estates, agriculture, IT, ICT, energy, mining, renewables and medical with Pakistan, Qatar, and Türkiye may be further strengthened its foreign policy pursuits of greater socio-economic prosperity. Hopefully, most recent inclusion of the TRNC as observer member in the Organization of Turkic States would be a value addition in the days to come.