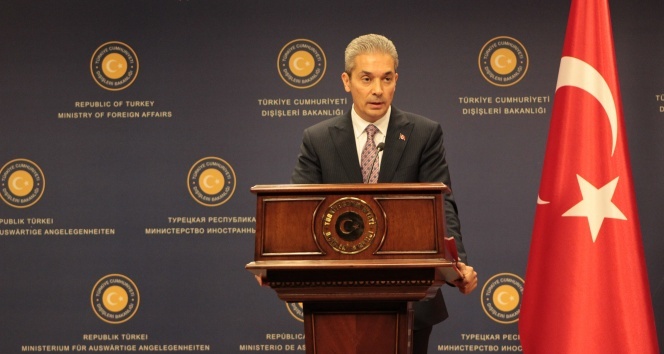 Aksoy: “EU ignores the existence and rights of Turkish Cypriots”

Turkish Foreign Ministry Spokesman Hami Aksoy stated that the EU, which made a statement regarding the third drilling activities of Yavuz drilling vessel in the licensed areas of the TRNC, acting under the pretext of union solidarity, should, first of all, end its unrealistic, prejudiced, and double standard policies.
In his written statement on this issue, Aksoy said that the Yavuz vessel proceeded to the licensed area G, south of the island, to conduct its third drilling operation in line with the licenses granted to the Turkish Petroleum Corporation in 2011 by the Turkish Republic of Northern Cyprus.
Emphasizing that in this licensed area, as the co-owners of the island, Turkish Cypriots have as many rights as the Greek Cypriots, Aksoy underlined that if both oil and natural gas are found in this area, both parties should share the revenues together.
Pointing out that regarding hydrocarbon resources and its income for the equitable sharing, Turkish Cypriot authorities within the framework of the proposal they made in July 13, 2019 still stands, adding that there is a significant opportunity for the solution, Aksoy noted that the EU has remained silent against the usurpation of the rights of Turkey and the Turkish Cypriots in the Eastern Mediterranean since 2003.
Aksoy continued as follows:
“The EU has never mentioned or referred to the Turkish Cypriots in any of its statements on the subject and as such has ignored the existence and rights of the Turkish Cypriots,” Aksoy said.
“No one should doubt that Turkey will continue to protect the rights of the Turkish Cypriots also in the south of the island, until their rights to the hydrocarbon resources of the island are guaranteed and a cooperation mechanism is established within the framework of the proposal of 13 July 2019,” Aksoy added.