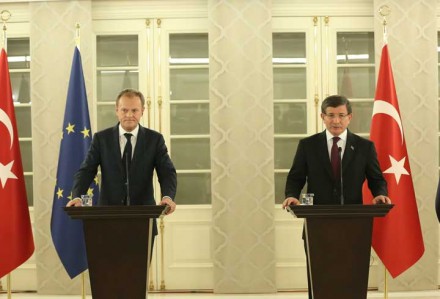 Davutoğlu: “Turkey suggested a proposal within the framework of consciousness of responsibility”

In his speech at the joint press conference following the meeting with the President of the European Council Donald Tusk, Turkish Prime Minister Ahmet Davutoğlu said: “I would like to convey the proposal both to the European and the Turkish public again on the issue of refugee crisis that we conveyed previously at the Brussels Summit. The main aim of the proposal is human dimension. Turkey suggested a proposal within the framework of consciousness of responsibility for no more people losing their lives in the Aegean Sea and to reduce the illegal crossing as much as possible and if possible to be removed entirely.

Davutoğlu also added that Turkey’s position is clear regarding 3 billion Euros financial support which will be provided for Syrian refugees with contributions of the EU Commission and the member countries. We never bargain for the money. We never see this issue as a material matter, this is a humanitarian issue.

Turkey’s decision to abolish visa requirement aroused a great interest in South Cyprus 4 May
Özgürgün: “My aim is the continuation of the relations with Turkey in a much more healthy and fruitful way” 4 May
Siber: “Mutual relations between parliaments contribute to friendship and peace” 3 May
Özgürgün: “Azerbaijan people and the TRNC people are the inseparable parts of a nation 3 May