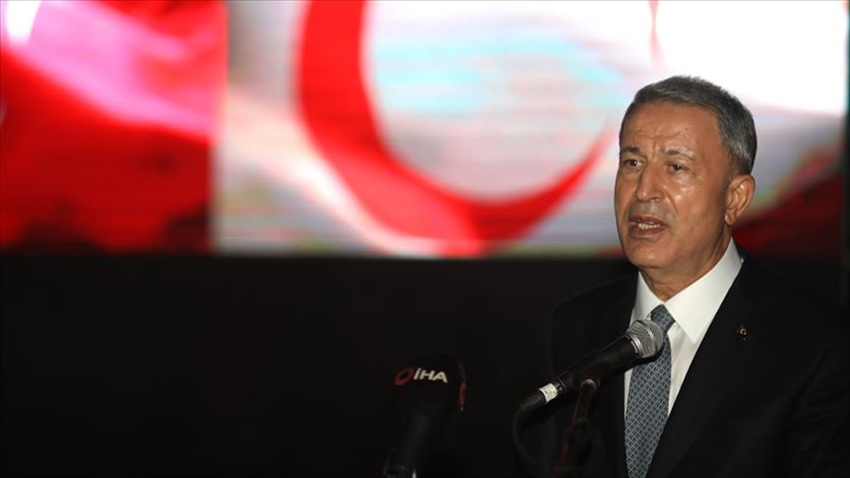 Eastern Mediterranean message from Akar: We will definitely use our right

Turkey’s National Defence Minister Hulusi Akar stated that carrying out research and analysis in the licensed areas of the TRNC and in the maritime jurisdiction areas of Turkey and benefiting from these resources are Turkey’s right.

In his speech at the reception, Akar said:  “Everybody needs to know the following issues; as the Republic of Turkey the issue of Cyprus is our national cause” and he also added that 1974 perspectives, and the approaches are still the same. Expressing that they have the same feelings and thoughts today, Akar also said that Turkish Cypriots are their brothers, and they are ready to do whatever is necessary to protect the rights and interests of their Turkish Cypriot brothers in the TRNC.

Stating that peace and trust did not come only to the Turks on the island, but also came to the whole island, Akar said: “We are on the side of peace, we try to maintain peace, but we are also committed to protecting the rights and law of our Turkish Cypriot brothers who live in the TRNC. We have done everything up to now, and we will continue to do so. As we always say sincerely, we are on the side of peace. We are in favour of the life here in peace and prosperity with fair distribution and sharing in good neighbourly relations, yet on the other hand, we will not allow any fait accompli, I have to note here that there is no chance of a solution in which Turkey is not included.”

Emphasising that determination of maritime jurisdiction areas, protection of equal sovereign rights and sharing resources equitably and fairly are very important, Akar said: “These matters should never be ignored. We will protect both our own rights as Turkey as well as the rights of our Cypriot brothers in this sense and I want to say that we are always ready for to do this. Carrying out the necessary research and analysis in order to benefit from the resources in the Eastern Mediterranean in Turkey’s maritime jurisdiction areas and also in the TRNC’s licenced areas is our right. We will use it and no one should doubt it.”