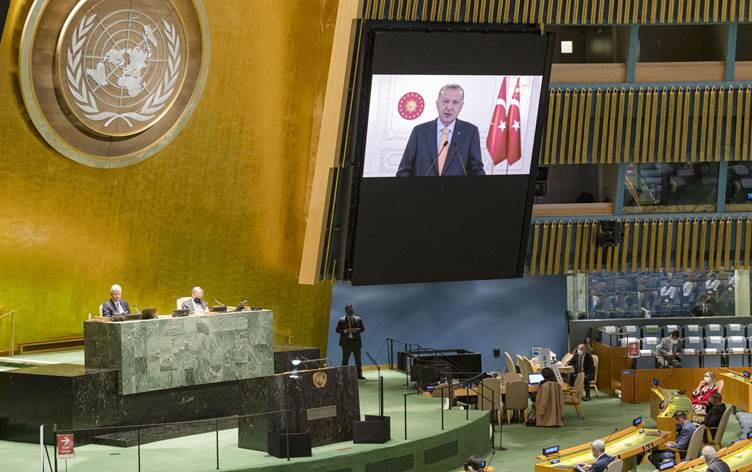 Erdoğan: “The only obstacle in front of a solution is the intransigent, unfair and spoiled approach of the Greek Cypriot side”

Addressing the United Nations General Assembly in a video message, Turkish President Recep Tayyip Erdogan said Turkey’s primary preference was to solve disagreements “justly and in an appropriate way” through talks, but added that “futile” attempts to exclude Turkey from plans in the Eastern Mediterranean could not succeed.

“We will not tolerate the overriding of the rights of the Turkish Cypriots and Turkey. The reason for the deadlock in the region is the unilateral steps of Greece and the Greek Cypriot side with maximalist demands.

I want to reiterate our call to establish a dialogue and cooperation with coastal states in the Eastern Mediterranean. We are proposing holding a regional conference where the rights and interests of all coastal states are taken into consideration, and where Turkish Cypriots are also present.

The only obstacle in front of a solution is the intransigent, unfair and spoiled approach of the Greek Cypriot side. As a guarantor country, Turkey have never left the Turkish Cypriots alone in respect of their rights, and will never leave them alone. The solution of the Cyprus problem is only possible if the Turkish Cypriots are accepted as co-owner of the Island. Turkey will support each solution which guarantees the security and historical and political rights of the Turkish Cypriots permanently”  Erdoğan stressed.