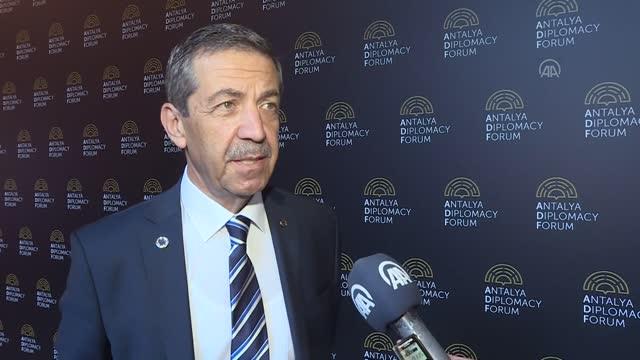 Ertuğruloğlu: “We can’t lose another 53 years”

Tahsin Ertuğruloğlu said during the interview with the AA correspondent in Belek, where he came on the occasion of the Antalya Diplomacy Forum (ADF), of which Anadolu Agency (AA) is the “Global Communication Partner”, “We have lost 53 years, we cannot afford to lose another 53 years.”

Stating that the 5+1 informal meeting held in Geneva on 27-29 April under the leadership of the United Nations (UN) was not a new negotiation process, Ertuğruloğlu said “Our expectation from the UN Secretary General now is the call for the second 5+UN meeting. What matters is what happens after this second one”.

The Minister emphasised that there is no common ground between the sides in Cyprus and said “It seems that there will be no common ground. Because the Greek Cypriot side continues to be recognised as the ‘Republic of Cyprus’ with the wrong diagnosis of the whole world. As long as they continue to be recognised as the Republic of Cyprus, they will never foresee any power-sharing and authority sharing with the Turkish Cypriots. It is the most basic policy of the Greek Cypriots that the Turkish Cypriots do not reach the position they deserve in the international arena”.

He said that establishment of the Turkish Republic of Northern Cyprus is a reality and added that even if a state is not recognised, it does not mean that the state does not exist. Underlining that the EU made the Greek Cypriot side a member by violating its own laws, Ertuğruloğlu also expressed that the EU is a party against the Turkish Cypriots in the Cyprus issue.