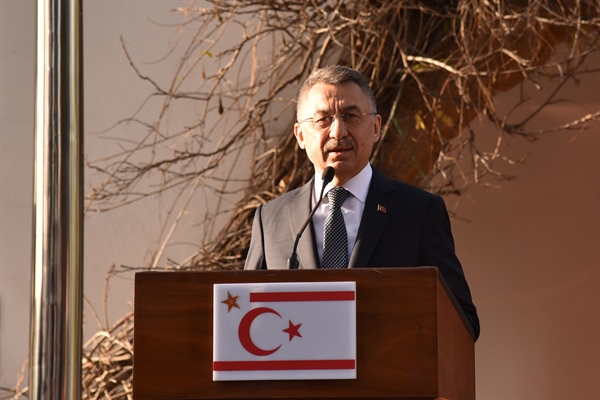 Oktay: ‘There is no alternative in Cyprus other than a two-state solution’

Following his meeting with the President of the Turkish Republic of Northern Cyprus (TRNC) Ersin Tatar, Turkish Vice President Fuat Oktay pointed out :  ‘There is no alternative in Cyprus other than a two-state solution, it is time to face the realities. There are two separate communities, peoples, democracies, and states on the island. Negotiations based on a federation model would serve nothing except to waste time’.a

Oktay stated that they also evaluated the Maraş issue and the recent developments in the Eastern Mediterranean with President Tatar. Underlining that Turkey and the Turkish Cypriot people are definitely in harmony on the Cyprus issue, Oktay said: ‘Turkey will continue to give full support to the Turkish Cypriots in order to provide peace, security, stability and prosperity both in the island and in the Eastern Mediterranean. Our recent contacts and consultations have once more shown our determination to rejuvenate and raise the TRNC’.