President Tatar: “Turkey’s guarantee and Turkish troop cannot be given up” 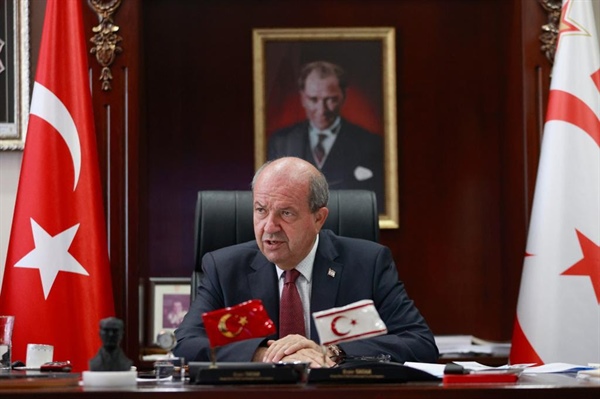 In his written statement, President Ersin Tatar noted that motherland Turkey has declared many times since 1960 that they will not give up their right of guarantee stemming from international agreements.

“It is not possible for the Turkish Cypriot people to give up Turkey’s guarantee,” Tatar stressed.

Tatar replied to the Greek Cypriot leader Nicos Anastasiades who accused Turkey of having an uncompromisable stance and said that Turkey never wanted the guarantees to be lifted.

Tatar stressed that describing the establishment of the Republic of Cyprus as a springboard to Enosis, the Greek-Greek Cypriot duo took action from the very first days of the republic to change the Treaty of Guarantee and to remove the guarantorship of Turkey, which they saw as a threat against Enosis. They took initiatives in this direction. When the initiatives came to the fore, the Motherland Turkey and the Turkish Cypriot people opposed it, and it was stated that Turkey’s guarantee could not be lifted.

“ Since then, the Greek Cypriot side has been demanding the removal of Turkey’s status as a guarantor and Turkish troops from Cyprus. This is an impossible dream,” Tatar stated, adding that the Turkish Cypriots and Turkey are completely against this.

Tatar also stressed that we saw the last example of this in Crans Montana. The necessary response was given to the Greek Cypriot leader Anastasiadis, who said “zero troops, zero guarantees” in Crans Montana. Adding that Anastasiades, who tries to distort the facts and events by claiming that Turkey never wanted guarantors to be removed from Cyprus, attempts to conceal the Greek Cypriot administration’s uncompromising attitude, and blame Turkey and Turkish Cypriots for lack of solution in Cyprus.

Tatar underlined that it is not possible for the Turkish Cypriot people to give up Turkey’s guarantee.