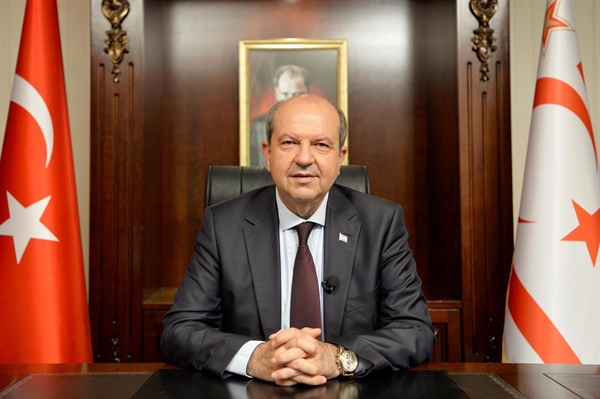 President of the Turkish Republic of Northern Cyprus Ersin Tatar gave an interview to the Greek Cypriot Newspaper Kathimerini. President Tatar said ‘we think that an agreement based on sovereign equality, a two-state solution which will solve the problems of two states and will give the opportunity to share the wealth and prosperity will be in favour of all people in Cyprus and we will bring that to the negotiation table.’

President Tatar underlined that they do not want to lose time with negotiating a federation for 40 more years, and stated ‘we are in favour of evaluating anything legitimate, which does not break the tie between Turkey and Turkish Cypriots, values the sovereign equality and will not collapse the socio-economic structure by the property arrangements’.

Turkish Cypriot President also pointed out that the Turkish Cypriot side proposed cooperation in the Eastern Mediterranean however, the Greek Cypriot side’s attitude is unacceptable which is ‘We do what we want and if you want anything you have to exclude Turkey’. President Tatar also pointed out that the steps will be put forward regarding Maraş in line with the decisions of the European Court of Human Rights (ECHR).