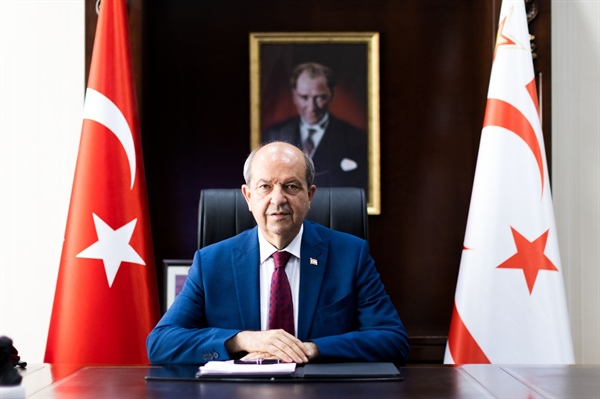 Tatar: “Maraş will be opened to a settlement without denying private property rights”

President Ersin Tatar replied to questions on the agenda in a special broadcast, in which he participated with BRT. Stating that they have been in full consultation and a very consistent attitude with Turkey for the last 2 years regarding the opening process of the closed city Maraş, President Tatar reminded that he has been expressing that the status of Maraş should be changed since the time he was TRNC Prime Minister.

President Tatar said, “There is not much to criticise about the steps we have taken” adding that “Where were the UN and the EU when the Turkish Cypriot people were being treated unfairly for so many years?

During the negotiation process, the issue of Maraş came to the table 8 times.  However, due to the uncompromising attitude of the Greek Cypriot side, a solution could never be reached.” he said.

Expressing that they have changed the policy on the issue of Maraş, President Tatar said that, with the support of Turkey, their sensitivity will continue to the end in accordance with international law, and Maraş will be opened to a settlement without denying private property rights.  Former property owners will be able to apply to the Immovable Property Commission in order to remedy their grievances.

We opened the place to humanity, today the beautiful beach at Maraş is open for the use of our people. It has also been opened for the Greek Cypriots who want to come here and use that region. Maraş has been brought to humanity and it continues to be cleaned. This is our policy and it is consistent” Tatar said.

Tatar noted that a total of 337 applications have been made to the Immovable Property Commission so far, despite all kinds of pressures from the Greek Cypriot side.

Stating that there is no question of discussing the Maraş issue with the Greek Cypriot leader, President Tatar noted that a step towards the opening of Maraş, which is within the borders of the TRNC, to humanity and the settlement of its former residents through the Immovable Property Commission does not violate human rights.

Stating that this policy of the TRNC and Turkey will continue in a consistent manner, Tatar emphasised that there is no turning back from this step.

Stressing that the UN Security Council decisions on Maraş were taken 37 years ago, Tatar said: “The rules of the game have changed since then. The Maraş opening is also a part of this new understanding of politics. It is not against the law”.

Pointing out that the Republic of Turkey has brought up the Cyprus issue, which is carried out on our behalf all over the world, President Tatar emphasised that it is not possible for Turkey to remain silent in a geography that is so close to itself.

Stating that the security of Turkish Cypriots is guaranteed by Turkey, and that Turkey’s security in the Eastern Mediterranean comes from the presence of the TRNC, President Tatar noted that the new policy is built on solid foundations in this framework.

Stating that they will go to New York in September and the Secretary-General will look to see if there is a common ground, but as of now it is not at such a point, Tatar said that the Greek Cypriots can put forward the Maraş issue and avoid reaching a settlement.

Tatar stated that the Turkish Cypriot people have the right to obtain the passport of the Republic of Cyprus and said, “My citizens do not pay allegiance to you just because they have a passport.” (BRT)