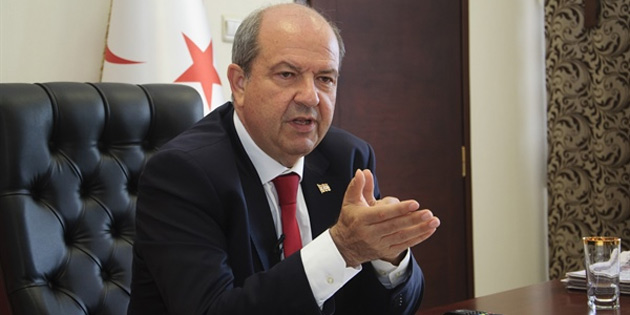 Prime Minister Tatar has criticised the European Union for remarks on the drilling activities of Turkey’s two drilling vessels with the licenses issued by the TRNC as “illegal and threatening”.

In his written statement Tatar protested regarding the reaction of the European Union in respect of the Yavuz vessel beginning drilling at Karpaz offshore for which the TRNC gave a license to Turkish Petroleum Corporation.

Mentioning that as the European Union claims, it is not drilling activities of Fatih and Yavuz vessels in the Eastern Mediterranean which are unlawful but the activities carried out by the Greek Cypriot side which disregards the rights of the Turkish Cypriot people which are illegal and threatening, Tatar stated that the EU’s stance in favour of the Greek Cypriots pushed efforts to settle the Cyprus problem into a further deadlock.

Pointing out that the Turkish Cypriot side and Turkey have rights in the hydrocarbon resources in the Eastern Mediterranean, Tatar said: “The Greek Cypriot side rejected the proposal concerning establishing a joint committee to conduct the seismic survey and drilling activities and to use the income obtained to provide the financing required for a possible agreement”.

Çavuşoğlu: “Turkey and TRNC ready for sharing and cooperation” 7 July
TRNC Ministry of Health stated the decisions for entry and departure from the TRNC 6 July
President Akıncı had a telephone conversation with Borrell 2 July
Tatar requested Anastasiades to “create cooperation and agreement with Turkish Cypriot side” 2 July