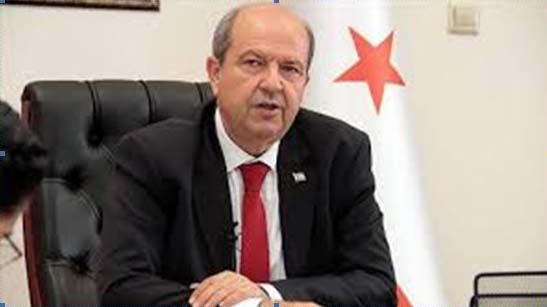 According to the information from the TRNC Presidency, Guterres expressed his wish for the social meeting between Greek Cypriot Leader Nikos Anastasiades and TRNC President Ersin Tatar

LEFKOSA (DNA) -United Nations Secretary General Antonio Guterres sent a message of congratulations in respect of the election of Ersin Tatar as the President of the Turkish Republic of Northern Cyprus.

According to the information from the TRNC Presidency, Guterres expressed his wish for the social meeting between Greek Cypriot Leader Nikos Anastasiades and TRNC President Ersin Tatar, which will be held on 3rd November 2020, to be productive and stated that he wants to discuss with President Tatar the quintet meeting which will take place with the participation of Tatar, Anastasiades, guarantor countries and the UN.

New Navtex for Oruç Reis in the Eastern Mediterranean

A new navigational telex, or Navtex (announcement to seafarers) which will continue until 14th November 2020 has been announced for the area where the Oruç Reis seismic research vessel will operate in the Eastern Mediterranean. According to the announcement, Oruç Reis will conduct seismic research activities until 14th November 2020 and the mission that will be carried out by Oruç Reis seismic research vessel will continue to be accompanied by the vessels Ataman and Cengizhan in the Eastern Mediterranean. Oruç Reis can conduct various geological, geophysical, hydrographic and oceanographic surveys, especially of the continental shelf, while also searching for natural resources.

Turkish Foreign Ministry Spokesperson Hami Aksoy said, “It is a futile effort for Greece to object to our activities after every NAVTEX announcement based on its maximalist claims.” Upon a question regarding the statement of the Greek Ministry of Foreign Affairs concerning Turkey’s seismic research activities in the Eastern Mediterranean on 1st November 2020, Aksoy has responded as follows:

“The Ministry of Foreign Affairs of Greece made yet another statement where it repeated its baseless claims regarding the seismic survey activity conducted by Turkey on its own continental shelf in the Eastern Mediterranean.

It is a futile effort by Greece to voice its objections to our activities by asserting its maximalist claims after each and every NAVTEX announcement. Turkey will continue its activities in the region within the framework of its rights stemming from international law.

Turkey is ready to cooperate with Greece and to solve the issues between the two countries through dialogue. Needless to say, we will continue to protect the legitimate rights and interests of Turkey and the Turkish Republic of Northern Cyprus with determination.

We expect Greece to refrain from escalatory steps in the region, contribute to create a suitable atmosphere for negotiations and declare that they are ready for the talks; instead of accusing Turkey with groundless allegations and as usual complaining to third parties.

We hereby invite Greece, once again, to have dialogue with Turkey in order to address both the issue of maritime jurisdiction areas in the Eastern Mediterranean and other interrelated issues between the two countries, without preconditions.”