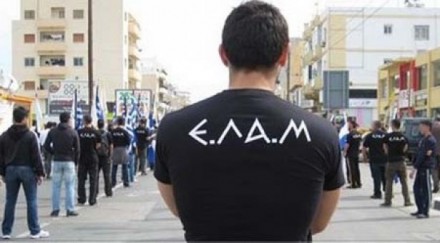 The extreme right wing and racist Greek National People’s Front (ELAM), which operates in the Greek Cypriot side was founded in 2008. Followers of EOKA-B act with the purpose of annexing the island with Greece and also oppose the ongoing efforts for a bi-communal bi-zonal federation in Cyprus and protest for the closure of the border gates. The organization defends excessive Greek nationalist ideology and strictly refuses a federal solution in Cyprus. ELAM is well known by its publications and organizations against the TRNC and the Turkish Cypriot people.

One of the greatest supporters of ELAM on such racist verbal attacks and while transforming these verbal attacks into physical force is the extreme right-wing Golden Down Party, which was founded in Greece in 1993 with neo-Nazi ideology.

Golden Dawn party is known as the brother-group of ELAM and group members frequently educate the members of ELAM in Cyprus in accordance with their ideology. Golden Dawn party members support ELAM in many racist activities carried out by the organization.

One of the greatest examples of the ELAM organization’s grudge and hatred towards Turkish Cypriots was the stabbing of the Turkish Cypriot musician Sertunç Akdoğu in a festival held in Larnaca, in 2010.  Although a legal process was launched for suspects, the case ended with exculpation.  2nd President Mehmet Ali Talat who went to Limassol in order to give a lecture also was attacked by Elam members who raided the hall with sticks and torches in their hands and managed to survive without penalty. None of the racist ELAM members were punished. With the opening of the border gates, Turkish Cypriots who crossed to South Cyprus with their cars were often attacked verbally and physically by the fascist ELAM organization. The ELAM organization continues these racist incidents fanatically due to the arbitrary attitudes of the Greek Cypriot police.