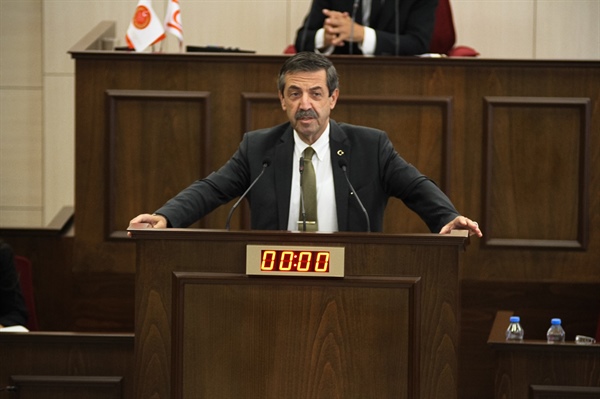 Pointing out that the conditions have changed and it would be got nowhere with conventional approaches, arguments, parameters, and negotiations, Ertuğruloğlu said, “The reason for this failure is that the Greek Cypriot side is treated as a ‘state’ and we are treated as a ‘society’ in the international community.”

Ertuğruloğlu said, “We welcome for the negotiations of the two states. You cannot have a state in the federation”.

Expressing that no deficiencies or mistakes can be a reason for denying the state, Minister Ertuğruloğlu noted that the mistakes and deficiencies should be identified and corrected, and the state should be strengthened.

Stating that the people took other paths because they were not happy with the performance of the governments and that’s why they said “yes” to the Annan Plan, Ertuğruloğlu emphasized that there are two states on the island and that the future should be shaped as two states.

Ertuğruloğlu noted that as long as the Greek Cypriot side is recognized in the world, it will not share anything with the Turkish Cypriot side.

Reiterating that the federation would not realize, Ertuğruloğlu said “Political equality also existed in the 1960 Republic, however it was disappeared. If there will be a partnership, it must be on solid ground. This solid ground is sovereign equality.”