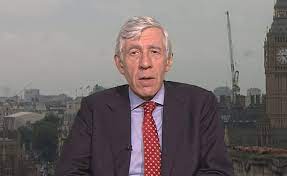 Former UK Foreign Secretary Straw: “Two-state solution should be discussed from now on”

Former Birtish Foreign Secretary, Jack Straw gave a special interview to NTV. In his interview, Straw stated that instead of a federal settlement, a two-state solution should be discussed for the future. Adding that the two communities have been living separately since 1974, Straw said that two-state solution model is not to the advantage of South Cyprus because they do not want to share their power with the Turkish Cypriots. Commenting on the claims published in the Sunday Express that the United Kingdom is preparing to recognise the TRNC, Straw said that he is not a member of the government but he would be pleased if the UK recognises the TRNC.

Furthermore, evaluating the 5+UN meeting in Geneva, Straw said that he had met with the UK Foreign Secretary in the last 15 years and saw that they support a two-state solution and open borders in Cyprus although they seem to be supporting a bi-zonal solution in front of the public opinion. Stressing that South Cyprus is the majority in Cyprus and the ENOSIS view is dominant in South Cyprus, Straw said that the Greek Cypriots will resist for ENOSIS so the UK’s recognition of the TRNC will be an important step in that process.