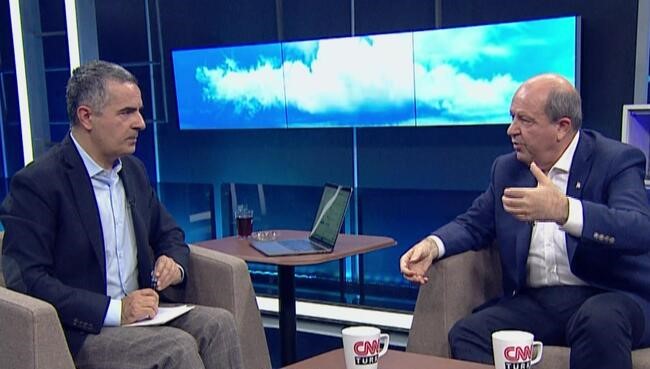 Tatar stressed that there are two equal peoples in Cyprus

Prime Minister Ersin Tatar made a statement during a television program he attended on CNN Türk in Istanbul.

Stating that the failure of attempts towards a final settlement in Cyprus may lead to separation, Tatar said that the negotiations were held for a republic of partnership on the basis of the sovereignty and equality of the two peoples, but that the Greek Cypriot Administration brought an agreement full of deception to the table each time.

Tatar indicated that he did not expect a settlement in Cyprus in the near future.

Tatar said, “I personally do not have such an expectation. An agreement is not possible considering the opinion of the other party in the evaluations made with President Mustafa Akıncı. In order to protect our rights, we need to discuss thoroughly at the table.”

“Turkey has set a new map by signing agreements with Libya. With this map, it is seen that the Greek-Greek Cypriot duo is unfair to Egypt and even to Israel. According to the Maritime Law, a tiny island country cannot have such demands. Turkey has the longest coastline, about 1800 to 2000 kilometres, in the Eastern Mediterranean. 1960 agreements are obvious. Turkish Cypriots have rights as much as the Greek Cypriots. The rights and interests of the TRNC will be protected by Turkey. Libya’s rights will be also protected through Turkey’s attempts” Tatar added.